Wow! It’s been a very long time since I last wrote a blog post, so let me inform all of you what I have been doing.

During the summer I travelled to a couple of places such as Vancouver and my cottage, which is located in Quebec. I also was rowing this summer, which was very fun! I raced at Henley in the double and flyweight 4+. Sadly in the flyweight 4+, we did not beat our record from last year, which was finising 4th. In the double, we were a couple of seconds off from making it into the finals, but if we raced in another heat, we would have made it.

For the past couple of weeks, I have been debating whether to get the iPhone X. I’m still not sure because of the massive price tag, but the phone is amazing.

From now on, I am hoping to blog at least once a week, so make sure to add the RSS feed, by clicking suscribe!

Now since the break is almost over, I will be heading back to school. I got to try many new things this break. I tried parasailing and rowing port. Also, an accomplishment I made was so far, Ive travelled on the whole entire interstate 75! For the first stretch north of Detroit I was on 2 years ago for a hockey tournament. From Detroit to Knoxville I was on the bus for rowing, and then from Knoxville to Tampa again, covering my whole route. This brings my interstate travel to 2. The Pennsylvania Turnpike, and the I-75 along with some smaller interstates.

Next week I am back off to school, but no more tie because it it now spring dress!

I have two tests for the first week back which is the literacy test and a music history test.

This is my first blog post in a while, and it is coming from Tennessee. Last night (Thursday), we set out on a long journey. We left Toronto at 9pm and arrived in Tennessee at about 12:30pm. I have major difficulties sleeping on busses, and could only sleep for 3 hours.

Next week, after a hard week of training, I can look forward to heading to Florida.

Wow, it’s been a week, or actually longer since the last time I wrote a blog post. I am writing this post while waiting at school until 5pm for a Trombone lesson… Seriously 5pm? I thought I would take this spare time to write a blog post about, hmm… well, nothing really but I thought I would write about my March break. For my March break, I will be travelling to the United States, for rowing in Tennessee and then I will be continuing south for some vacation in Florida. Will have a nice, hot 2 weeks vacation which will be awesome!

Hopefully, my injury will get better before the Tennessee so I can actually row! Anyway’s it should be a fun experience! Last year I got super sick which was not fun. Then I went to Florida and it was absolutely dreadful. Hopefully I will be a little more careful and not get sick this year.

So this past week was awesome! Last week I did not have class on Wednesday, Thursday was a half day, Friday was no school and then this week on Tuesday I had World Affairs Conference which I did not attend. Ugh, well that was a nice full break but now it is back to hard work and for the push in all other aspects of school life.

I have unfortunately injured myself once again in the back area rowing last week. On Tuesday morning, my back started to hurt which caused a lot of pain in the lower back area while erging - rowing machine. That afternoon, I went to the doctor along with an x-ray to be re-checked up to see if everything was okay. The x-ray showed no conclusive results about my injury but it did show up that I had a little muscle injury. I went back to rowing on the Wednesday, which again was probably bad for my back. Surprisingly after my rowing on Wednesday, nothing happened, so I assumed that it was nothing major and my back had surprisingly fixed itself. On Thursday assuming everything was okay, I went back to rowing, and almost immediately into the practice, my back started hurting again. Then I went to the doctor and I was told that I wouldn’t be able to row for a while. Well, now I am injured for 3-6 weeks which will be horrible.

Today was a great day at school because it was jazz day. Anyway, we did not have class and we just played out instruments for an hour. Tonight we have out concert so hopefully all will be good.

Today, I have played over 5 hours of the trombone so far, so I am pretty tired.

I have the best week coming up. Today I had off, tomorrow is a half day, on Friday it is a full day and then on next week Tuesday I do not have class on Tuesday due to the World Affairs Conference. That will be awesome, since my last history class was on Monday, and my next one will be next week on Thursday! Nice break of history and some other subjects like English. Sadly, I will need to write my missed math test on Monday morning…

Once, I found a hair in my food. What would be your reaction? Well, mine was horrible. I was unable to eat at the Upper Dining hall for a whole day. Today, my food was super greasy and some of the pieces of potato, were shredded into little bits. Below, I have a photo from my own meal. 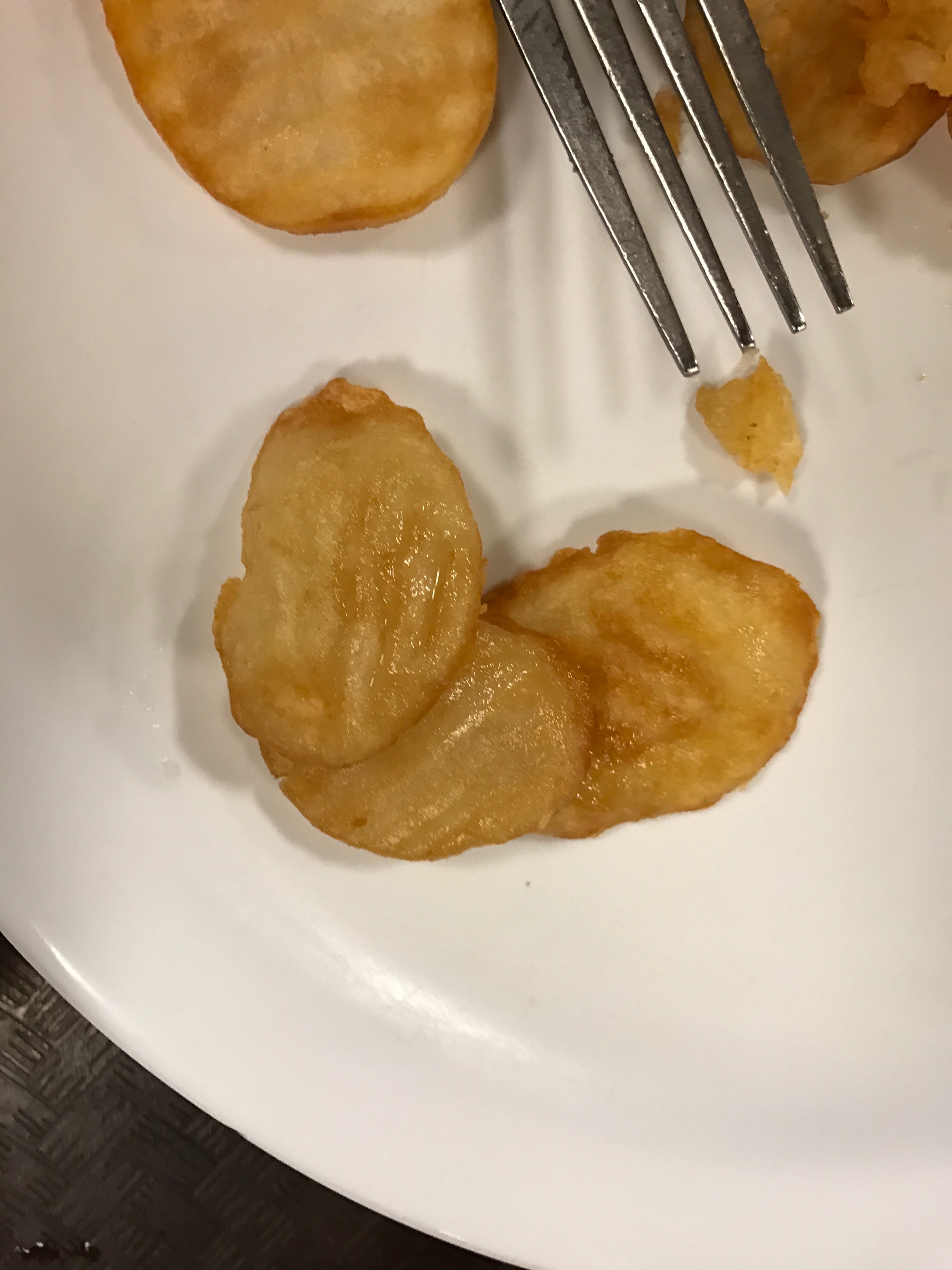 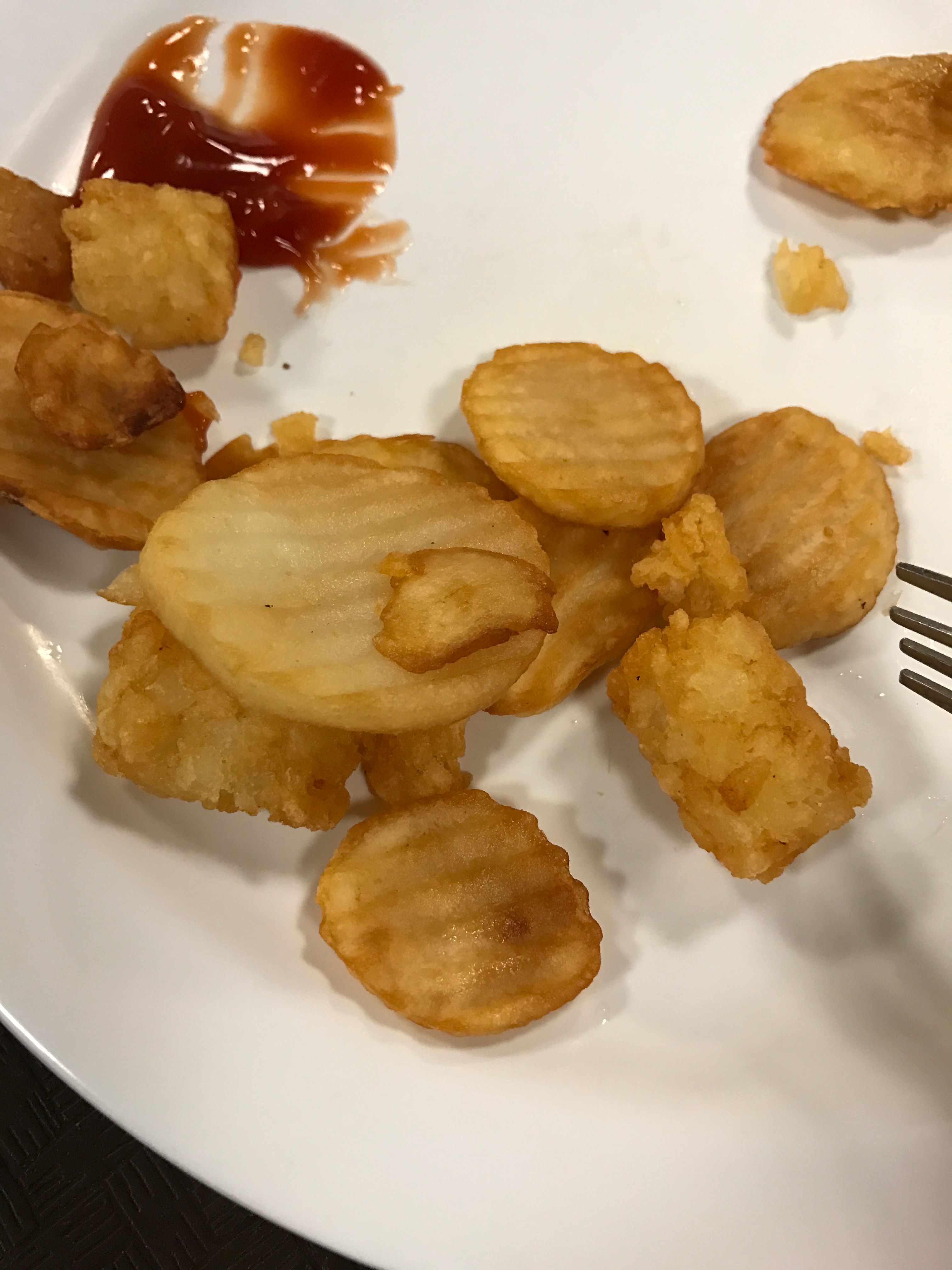 On the left, you can see that the food is very oily, and on the right, the food is in little bits.

This week and next week I’ve got so many tests. I have Science tomorrow (Friday), History on Monday, French on Tuesday, and Math on Wednesday. It’s sooooo much information to learn, it’s going to be hard to retain. Hopefully it all goes well!

Yesterday, I found out that President Donald Trump actually wanted to go ahead with his wall idea. Holy smokes! Let’s see how that goes… #MAGA

While I’m writing this blog post, we are “studying” for our history essay test. Essay tests are horrible because you need to write a full, 5 paragraph essay in 45 minutes. Woah! Last time we did an essay tests I just made the time limit.

On top of this, I have rowing everyday, so it will be hard to study and review for P1 tests. I might need to leave rowing a little early, or hopefully not, but just not go to rowing.

Ugh, today was a super long day… Firstly, rowing was absolutely dreadful, completing a 64 minute workout and a custom 14 minute warmup. Secondly, in science, we covered so much content I am so confused, and can’t study for the test on Friday. Hopefully things will clear up on Wednesday. And uh, French, well you know, it’s French - i.e. a lot of fun.

Tomorrow, my class has our course selection information session in our math class that should be fun. I already know what I’m going to take for next year.

I just found out that at Upper Canada College, Y1 and Y2 students don’t get to vote for Head Steward in the preliminary ballot. I feel it’s unfair. Look, we are in the senior division next year, and the decision of head stewards will affect us.

Oh well, enough with the rant’s… Hopefully I will get something better to post about next time…

So I don’t have much to do today, besides working on my website and yeah. I’m planning to make a new release for my website which will include a little new content and yeah.

Rowing was fun this morning, we did a technical workout, but yeah, it was fun I guess. In a couple of weeks we go to Tennessee! Yay!

I thought I would make my first post interesting…

Today at my school (Upper Canada College) we watched stunned, as President Donald Trump was sworn into office today. This was a big landmark in history because after all, the United States is one of the most, if not the most powerful country in the world. Many of us thought prior to the election that it would be impossible for President Trump to win the election, but we were all wrong. A couple days and in fact going into the election, Hillary Clinton was winning according to Cable News Network (CNN). A lot of people, including myself thought that it would be a clear decisive victory for the Democrats and Hillary would be in office, however I was wrong.

The election in the United States was very important to me since I have cousins who live in the US. Also, with President Trump in office, he has said that he has plans to modify the North American Free Trade Agreement, or to totally remove it, which would be horrible for the Canadian economy.

Although I do not agree with all of President Trump’s ideas, I do believe that he needs to be given a chance in the oval office to see what he can produce.

Blogging and ranting directly from Michael.

Back to Blogging
Back to school :(
Tennessee Rowing
March Break
Injury :(